Ready for a little supernatural fun? Today, I’m reviewing Ryan Troske’s The Rising, which is the first book in his Supernaturals series! 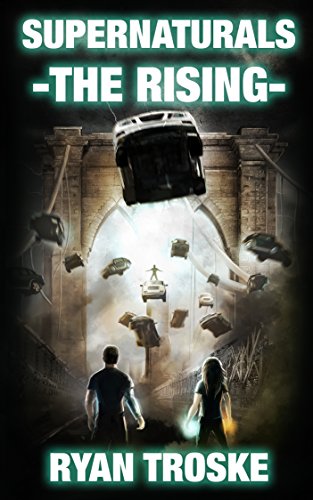 Ethan is just an ordinary teenage boy–infatuated with sports music and, of course, girls. Or so he thinks. Heading home on a rainy night from an amateur guitar gig, he finds his life turned completely upside down–literally. His car spins and flips out of control after what he believes to be a small animal jumps out in front of him. The horrific accident is only the beginning of a series of mysterious and seemingly unrelated events that will change his life forever.

After awaking in the hospital, and following an encounter with an enigmatic doctor, Ethan discovers that something that occurred during the wreck allows him to hear others’ thoughts, and even more perplexing, move objects with his mind. While trying to wrap his head around this mystery, he realizes he’s not alone. There are others out there with special powers. Not long after learning of this new world, Ethan’s ever increasing lack of control places those around him at serious risk. In order to protect those he loves, he makes the difficult decision to leave and accepts an offer to attend specialized training along with other so called Supernaturals to gain command over his newfound gifts. Shortly after beginning his schooling, Ethan is sent on a mission to kidnap who he believes to be the enemy leader in a well concealed Supernaturals war. But the further he becomes embedded in this new world, the more he discovers things are not quite what they seem and doesn’t know who can be trusted.

In this first installment of the Supernaturals series, Ethan discovers that super powers aren’t always so super, and is faced with difficult decisions that will not only affect his own life, but which may determine the life or death of his newfound companions and mentor.

The Rising tells the origin story, if you will, of Ethan, a high school kid who ends up with some serious supernatural powers.

The first thing I commented on when starting this book was the fact that I liked the “voice” of Ethan. The author makes the first person narrative feel natural and real- something that is often missed in this writing style. I did find myself questioning some of Ethan’s thought patterns though- things I would have serious concerns about, he doesn’t, and where I would think a particular thing is normal by now, he suddenly takes issue.

While the first part of the book takes a bit to ramp up to where it’s going, once it goes, it goes; you’re suddenly bombarded with characters and action as Ethan and his new supernatural comrades train and learn to harness their powers. Unfortunately for me, some of the characters blurred together. I found myself double-checking who was who, simply because there are suddenly so many of them, and there are a few of them who never get fleshed out on the page as well as I had hoped. Still, it was a fun, action-packed ride.

Oh, and the Epilogue is killer. Make sure you read it.

I think it was a good setup for the rest of the series! The author’s definitely got his roots firmly planted, and he’s got a way with words that makes Ethan’s story both natural and surreal.

If you’d like to pick up a copy of The Rising, head on over to Amazon, where it’s on sale AND a part of Kindle Unlimited!