The newest work from John Bhrel & J. Sullivan comes out today- Resurrection High: A Black Comedy, and I had the pleasure of reading it for review! Those who have read my other reviews know that I’m quite the fan of the duo’s work, plus being a kid who grew up in the 90s, I was all in! 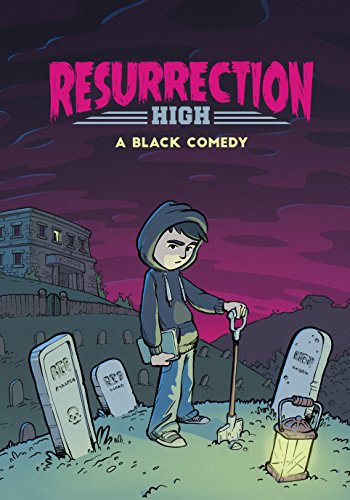 Here’s the blurb for Resurrection High:

Resurrection High is like Carrie, but without the telekinetic powers; like Donnie Darko, without the time travel; like The Karate Kid, but our protagonist is training in poetry. A subversive, spooky tale set in the days when America Online, The Smashing Pumpkins, and The X-Files reigned supreme..

At Lestershire High, Eric Verlaine is seen as a freak, even by alt 90s standards. His best friend is dead, his only living friend is tied up with a girl, and a group of vile bullies make his time at school unbearable. Eric would rather spend his days in the local cemetery than go to school, or even home, where he is ignored by his mother and abused by his stepfather. He’s planning one last adventure with his deceased pal, an exhumation to get at the small safe in his friend’s casket, the contents of which Eric believes will provide some form of closure. After visiting the grave of his friend one evening, Eric is shown a curious monument to a trio of artists who died mysteriously a century prior, sparking an investigation into his town’s unsavory past.

Resurrection High is a nostalgic, darkly comic story of a teenager finding a passion for life after insurmountable loss.

First off, any kid of the 1990s will instantly recognize the callbacks in this book; from pogs to JNCOs, Teenage Mutant Ninja Turtles to Nirvana, it’s all in there. While some callbacks are incredibly nostalgic and work well, others can be heavy-handed and clunky, reminding you far too often on the page of the time you’re in.

Though it’s a loving ode to the 90s, Resurrection High is ultimately a tale of a teenage kid finding himself after the death of his best friend. As someone who has recently experienced a lot of grief, Eric’s seemed genuine and I was definitely there in his despair with him.

The book addresses bullies and the horrible things they do, and the all-too-real iteration of what high school is really like for many kids; we all know the jocks, the freaks, the preps, and the kids that waver in the cracks between them.

As usual, the duo does the horror part of the story well– these two know how to do ambiance. When ghosts appear, they’re unsettling and their mystery demands your attention. When corpses are shown, they’re gruesome.

When two teenage kids are exhuming their dead friend in hopes of getting into a lockbox… well, yeah, that’s there too.

My main gripe about Resurrection High is that the story strays so far off its self-prescribed course. At times, we go so far into Eric’s life that it’s hard to see the path back to the point of it all– yes, we experience the bajillion valid emotions of a teenager, but it’s almost like Eric (or the story) forgets what it came for. Are we still concerned for Andy? His parents? With the introduction of the three enigmatic artists that capture Eric’s attention, it seems like we end up reading two separate stories that only intertwine a handful of times.

Also, do we ultimately find out what lies inside Andy’s safe?

Well, I won’t spoil that for you.

Overall, Resurrection High was a good read. Kids of the 90s will appreciate the attention to detail of the era, and Eric is relatable in a lot of ways. You’ll cringe at the inside jokes of these punk kids, and you might even cry graveside with Eric as he attempts to find peace and closure.

It just might take you a while to get there.

If you’re interested in a copy of Resurrection High: A Black Comedy, head on over to Amazon. You can also catch up with the duo over on Twitter (John Bhrel, Cemetery Gates), Facebook and at Cemetery Gates Media official site!