Spooky powerhouses Bhrel & Sullivan are at it again, this time with a romance-themed collection! Her Mourning Portrait is a brand-new set of short stories, just in time for Valentine’s Day! 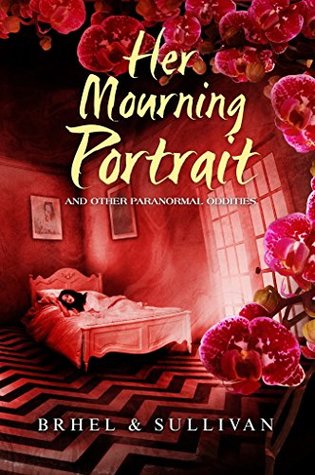 Her Mourning Portrait and Other Paranormal Oddities is the fifth anthology from Brhel & Sullivan. It is a collection of dark fantasy stories which focuses on the interplay between the euphoric and lamentable moments of romantic commitments.

These ten tales are light romances, which take turns through various fantasy subgenres such as science fiction, the paranormal, the occult and the weird.

“Lady of Cayuga Lake,” which recounts the last hurrah of a separating husband and wife, a final vacation which takes a turn toward the paranormal when they both spy a ghost over the lake. Will they have what it takes to work together, confide in each other, and solve the mysterious disappearance of Mary Gold?

“The Lost Cache tells of the strain an obsessive hobby can have on a marriage. Hillary appears to give Eric every chance to engage her, and work his way back toward an intimate companionship, even going so far as to plan out a special evening of hiking and geocaching in an old cemetery with her husband.

“Side by Side is a quirky cemetery tale about a confrontation between a long-dead man and his widow’s second husband, regarding the final resting place of their beloved-in-common.

“Her, He, and a Corpse Makes Three” focuses on a love triangle between a living couple who work in a funeral home, and the woman’s recently deceased, yet spiritually returned ex-boyfriend.

This is my favorite work of Bhrel & Sullivan’s yet. The stories- all of which are short- all have fantastic twists to them that really rev up the vibe; just when you think they’re coming to a nice, neat ending, something off-kilter pops up, and the story flies off again. I’m such of a fan of the writing style and overall work- I think these collaborators get better with each new work.

The only reason half a star is knocked off, is because of some minor details being off in the stories; for example, in the title story, Her Mourning Portrait, it’s indicated that the wife’s sick bed is thrown out years before the ending, yet the husband is described as lying in the same bed many years later. Now, this could be a trick of the story- after all, that’s the point of many of them, most including a magical or superstitious, otherworldly vibe- but it was a bit jarring for me when it did happen, and I questioned whether or not that detail was missed.

All in all, another great set of stories!

Want to get your hands on a copy? Her Mourning Portrait is in Kindle Unlimited, or you can purchase your copy on Amazon!