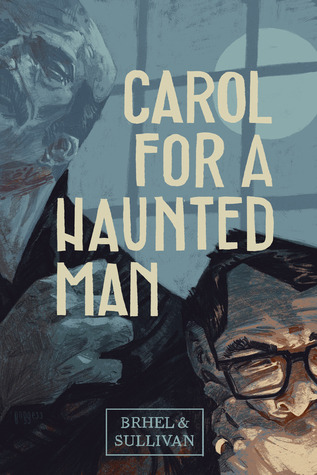 A few days ago, I was delighted to see an email in my inbox, indicating that one of my favorite Horror duos, Brhel & Sullivan over at Cemetery Gates Media, had a Christmas-themed work I had not read, and asked if I’d like to review!

So the novella is called Carol for a Haunted Man, and this is the blurb for it:

CAROL FOR A HAUNTED MAN is the tale of a daunted man’s will to succeed in the face of despair, inspired by, and in homage to, the Christmas stories of Charles Dickens.

As some authors dream into the very fabric of their life’s narrative, Jacob Martin attempts to reestablish the comforts of his childhood by moving back to the street where he grew up. Lost in life, newly divorced, and separated from his three young kids, Jacob is driven to write a book worth remembering, as a way of giving his life a new lasting purpose and meaning.

Finding himself at a standstill on the novel, a lonely recluse during the holidays, Jacob manages to connect with an attractive woman, and befriend an older man from his distant past, an author like himself. As Jacob soon discovers, nostalgia can be a healthy distraction, or it can be the noose by which one hangs.

The blurb is as crisp and clever as the writing within the novella– I’d contend that Carol for a Haunted Man is some of Brhel and Sullivan’s best work. Many descriptions within the novel are stark and cold, while others are so lucid that the whole scene blurs– both of these are good things, and they do not clash within its pages. The word choice is whip-smart, and I found myself grinning a little at Jacob’s thought trains, simply because the entire fabric of the story is so concrete and well-rounded. Nothing feels empty, which is quite a feat in novella form; the story is so sure of itself, set on a solid foundation, even if Jacob rarely is.

Carol for a Haunted Man definitely gets Four Skulls!

Okay, okay, I’ll give you guys snowflakes for the season, eh?

I really enjoyed the quick read, obviously! If you’d like to get your hands on Carol for a Haunted Man, head on over to Amazon, where the novella is available through Kindle Unlimited as well!

To catch up with all of John Brhel and Joseph Sullivan’s works together, head on over to Cemetery Gates Media!