Today’s a big day for Farah Cook as her debut title City of Skies comes out! This novel is part one of the Shadowislands Saga. 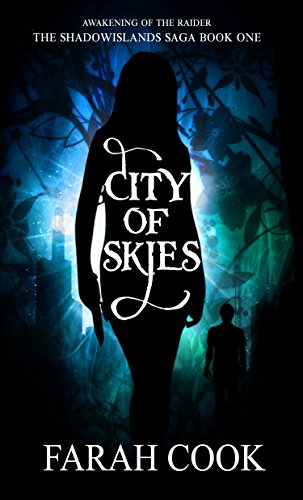 ONE GIRL. A DEADLY QUEST. AN EPIC JOURNEY.
Norah Hunt has just joined the deadly quest to discover the ancient Viking legend of the hidden Shadowislands. Her post-apocalyptic dystopian world, Triangle of Peace, is the only home she’s ever known. But at sixteen years old, the skilled young warrior joins an elite band of Raiders called Jarls. Her mission? Merely to win the perilous battle for Shadowislands and avoid falling in love with the mysterious boy who just happens to be her worst enemy—and she’s not quite sure which task is more difficult…

The dangerous battle for the Shadowislands stands between the Jarls and the Rognvald, a group of dark raiders led by Frederick Dahl, whom Nora can’t help but fall in love with. She does her best to keep her love a secret, and when Nora learns she is blessed with special powers by the Norse gods to unlock the Shadowislands, the stakes are higher than ever to claim the heavenly kingdom and crown.
Follow Nora Hunt’s action-packed adventure as she fights deadly beasts that guard the ancient myth of the Shadowislands in this epic fantasy saga.

Sounds fantastic, right?! Farah’s quite active in the book scene, so she’s no novice to a good story. You can follow along with her at the Shadowislands Book Blog Facebook Page, or head to the series’ Official Site! She’s also active on Twitter, so you can pay her a visit any which way you like.

If you’re interested in getting your hands on a copy of City of Skies, head on over to Amazon, where it’s a part of Kindle Unlimited!