Today’s post comes to you on the heels of some more spooky reading- that of P.T. Phronk’s The Arborist. Because I just don’t get enough at Halloween.

Or maybe it’s like always Halloween in my house.

With hearts, or stockings, or birthday cakes! 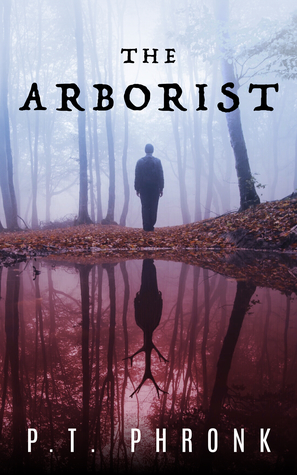 Here’s the official blurb:
The tree wasn’t there last night. Wes’s perfect little family doesn’t appreciate nature like he does, and they don’t seem to care that their own back yard has become a site of unearthly mystery.

But Wes cares. He needs to know what it is, and where it came from, because this is no ordinary tree. It’s growing far too quickly.

P.T. Phronk presents a short novel of quiet horror that will make you rethink the things growing just outside your door.

I’ve left out the spoiler-y bits, because seriously, let’s not spoil the surprise.

Evoke feelings- that’s what The Arborist does as a tale, and it does it well. From the very beginning, our narrator, Wesley, picks at nerves, egging on your very own obsession by entrenching himself in his. At the expense of his family, he digs deeper into the mystery of the red tree that has suddenly sprouted up in his yard, and against all warnings, he slips closer and closer to madness– and to this tree, seemingly bulging with life.

The novel does a great job with world- and word- building, and makes you feel as though you’re genuinely in each scene. Sights and sounds are clearly and crisply described, as are Wesley’s inner turmoils, which grow as the novel moves on. By the end of the story, I could hardly stand Wesley, but he and I were both so invested that I couldn’t put it down! The anticipation swells to bursting, and though the ending is quieter than I expected, it is not entirely out of place. It leaves many questions, and sometimes, that’s a good thing- I’m still considering the implications of the final reveal and its effects on the world outside of Wesley and his family.

Ultimately, I enjoyed The Arborist. Its writing style reminded me of Joe Hill’s The Heart Shaped Box, which y’all know is a huge favorite of mine. I definitely recommend this one for fans of horror! IT GETS FOUR OUT OF FIVE SKULLS, BECAUSE THIS IS MY WRESTLING ANNOUNCER VOICE. ALSO MISTER TORGUE WHEELLEEELEEEEEEEWWWWW.

Pick up your copies of The Arborist over on Amazon!