For today’s Eyes on Authors, I’d like to welcome Melinda Brasher, author of Far-Knowing, a Young Adult Fantasy tale about mages– some that go too far, and some that must learn to go the distance. 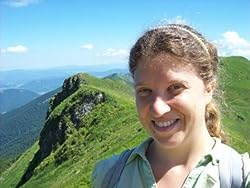 Melinda Brasher spends her time writing fiction, traveling, and teaching English as a second language in places like Poland, Mexico, the Czech Republic, and Arizona. Her talents include navigating by old-fashioned map, combining up to three languages in a single incomprehensible sentence, and dealing cards really, really fast. Her short fiction and travel writing appear in Intergalactic Medicine Show, Ellipsis Literature and Art, Enchanted Conversation, Go Nomad, International Living, and others.

Okay, Melinda. Give us the rundown on Far-Knowing.
After a spell goes dangerously awry, two inexperienced mage apprentices from different worlds must face a shadowy enemy they’d be fools to think they can defeat.

High stakes already! Here’s the official blurb:
After the Chaos Mage traps their mentor within a deadly spell, two apprentice mages set off to find and defeat this menace to the kingdom. But how can these inexperienced young women possibly track down and battle the sort of man who destroys villages with summoned wind or fire just for fun? They’ve learned no aggressive magic and never tested themselves against a real enemy.

Kallinesha, still an apprentice after seven years, struggles against her lack of raw magical power, compensating instead with discipline and study. Daughter of the High Commander, driven relentlessly by the duty in her blood, she knows they can defeat the Chaos Mage and safeguard the kingdom.

Ista, a commoner and daughter of a city baker, harbors no such delusions. But after only three years of study, her power burns much brighter than Kallinesha’s. The task before them terrifies her, but she loves her mentor too much to let her waste away under the Chaos Mage’s spell. Not if there’s the slimmest chance of saving her.

The two have never been able to get along while studying magic. Will they be able to work together now when so much is at stake?

Sounds good, right?! Anyone who follows either of my blogs knows I’m all about magic. *fluttery eyelids* Do you stick to awesome Mage-y stuff, or do you like to branch out?
I write all sorts of things: fantasy, science fiction, mainstream short stories, travel articles, flash fiction, even the occasional poem.

Most excellent. Poetry is one of my favorite things to write; it doesn’t demand much from you, but still allows you to tell your story the way you want. Yes, there are “rules” to it, just as there are for anything else, but breaking the rules and being free in your form is the most exhilarating feeling! What inspired you to start writing, and what keeps you going?
I’ve always written. Even when I was little, I “wrote” stories in my head all the time. I don’t always dedicate enough of myself to it, but neither could I ever stop completely. It’s part of me.

Now that your stories are out in the world and not just in your head, would you like to share any of your publication stories?
I was always scared to show anyone my fiction. Then I got up the courage and entered a short story contest at my library. I shoved it at my librarian friends and said, “Don’t read it”–which wasn’t exactly a glowing recommendation for my work. But I won. After that I started submitting to literary magazines and anthologies. I just sold my eleventh short story. I’ve also sold more than a dozen travel essays and articles and won a second fiction contest. You can find my self-published novel, “Far-Knowing” online, along with a free companion short story, “Chaos Rises,” and a collection of my published short work.

Short story submission is an area I haven’t dabbled in yet. I’ve got some great ones saved, but… I don’t know! Just not there yet. Any advice for your fellow writers?
Keep writing, and write what you love. It might not get you published traditionally, but it’ll make you happy. And if you want to show your work to the world, get involved with a good critique group first.

Yes, yes, yes! I grit my teeth a little every time I hear someone say, “Forget what you want to write- you’ve got to write the market. Write this very specific thing- not what you want! *Insert thing here* is super popular- you want to be popular, don’t you?” Like… are we back in high school? Come on. Yes, you may not get that traditional publishing gig, but you will have created something of your very own, and that in itself is magical. Do you have any favorite authors or titles that you’d like to share? What are your inspirations in the author world?
When I was little, my favorite book was Robin McKinley’s “The Hero and the Crown.” I loved fantasy and historical fiction the most. Now I read more widely, and find inspiration in many authors.

Thanks for coming to chat, Melinda! If you lovely readers are interested in finding Melinda Brasher’s work online, here are her links:

And you can grab Far-Knowing from Amazon and Smashwords!

One thought on “Eyes on Authors: Melinda Brasher”